We use cookies to make your experience better.
To comply with the new e-Privacy directive, we need to ask for your consent to set the cookies. Read more

You can simply browse our site without necessarily having to provide your personal recognizable information.

By visiting our site, you consent to our collection and use of information as outlined in this policy. We reserve the right to modify the privacy policy and related business practices at any time by posting updated text on this site. Please check this site regularly.

We’re are Highway AV; solutions provider for TV, Corporate, House of Worship, Sports, Cooperate and Education. Supplying Broadcast, integrated systems, and Post-Production equipment for over 20 years. Highway AV is a registered company (no. 3436800)

How is your information collected?

Information about you is obtained when you register with us as a customer using our website, subscribing to one of our newsletters or through conversations with our sales/account management team. For example, when you contact us about a product/equipment you would like to buy or services.

The type of information collected from you?

Personal information collected might include your name, telephone number, address, email address, location and IP address. We use google analytics to get insights on what pages are been accessed and when, and the device used to access our website, example, desktop or mobile. If you choose to order online or purchase a product from us, we do not hold or have access to your card information. Your card information is collected by our third-party payment processors who specialise in secure online processing of debit/credit transaction.

How will we use your information?

We may use your information to provide you with the latest AV news, insights and learning tips, changes to our services, process orders that you have submitted, deal with any questions, enquires, returns etc, or send you information you have requested that interests you such as deals and promotions. We will hold your personal information on our systems for as long as is necessary.

Please be assured that the personal information you provide will only be used by Highway AV and we will not sell or rent your information to third parties unless you have required us to do so, or we are required to do so by law, for example, for the purposes of prevention of fraud or other crime.

For security, Highway does not store credit card information for online orders. We guarantee that every online transaction you make will be 100% secure and safe. We follow general accepted industry standards to protect the information submitted to us.

Highway AV will NOT Sell, or pass on your personal information, or keep you on our mailing lists if you have requested it to be removed.

Highway AV is a company you can fully trust and part of our aim and goal is to make sure our customers fully trust us. 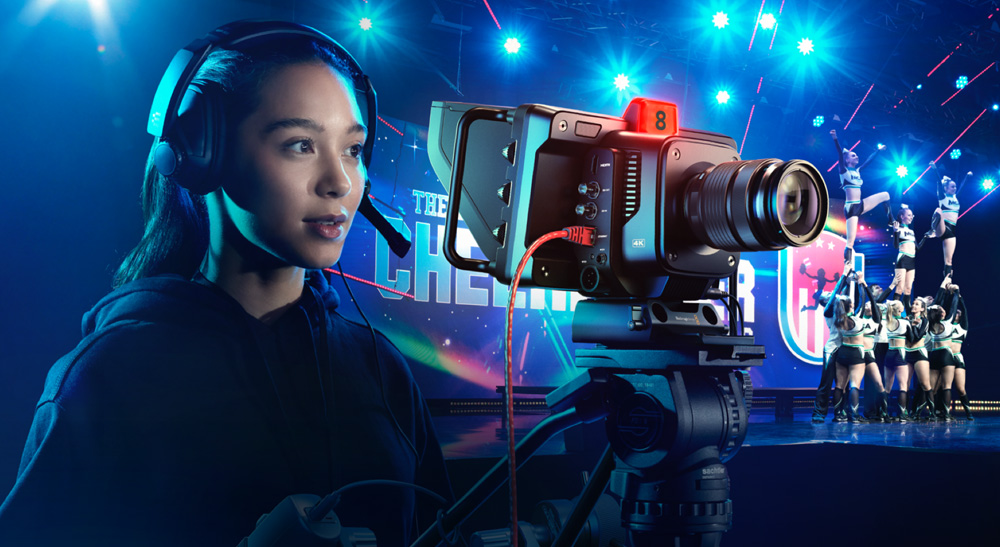 Thursday, July 29, 2021 - Blackmagic Design today announced a new family of Blackmagic Studio Cameras for live production. The new compact all-in-one design will help a wider range of live production customers who need cameras with professional features that are also fast to setup on location. The new Blackmagic Studio Cameras include design features such as carbon fiber reinforced polycarbonate and large integrated 7" viewfinders so they are very light weight making them much easier to transport and setup than large traditional studio cameras.

Blackmagic Studio Cameras have the same features as large studio cameras, miniaturized into a single compact and portable design. Plus with digital film camera dynamic range and color science, the cameras can handle extremely difficult lighting conditions while producing cinematic looking images. The sensor features an ISO up to 25,600 so customers can create amazing images even in dimly lit venues. Advanced features include talkback, tally, camera control, built in color corrector, Blackmagic RAW recording to USB disks and much more.

While Blackmagic Studio Camera is designed for live production, it’s not limited to use with a live switcher. That’s because it records Blackmagic RAW to USB disks, so it can be used in any situation where customers use a tripod. The large 7" viewfinder makes it perfect for work such as chat shows, television production, broadcast news, sports, education, conference presentations and even weddings. The large bright display with side handles, touch screen and physical controls makes it easy to track shots while being comfortable to use for long periods of time.

Large broadcasters use expensive studio cameras that are extremely large, so they’re not very portable. It features a lightweight carbon fiber reinforced polycarbonate body with innovative technology in a miniaturized design. The camera is designed for live production so it’s easy to track and frame shots with its large 7" viewfinder. The touchscreen has menus for camera settings, and there's knobs for brightness, contrast and focus peaking. Plus a tripod mount with mounting plate is included for fast setup. 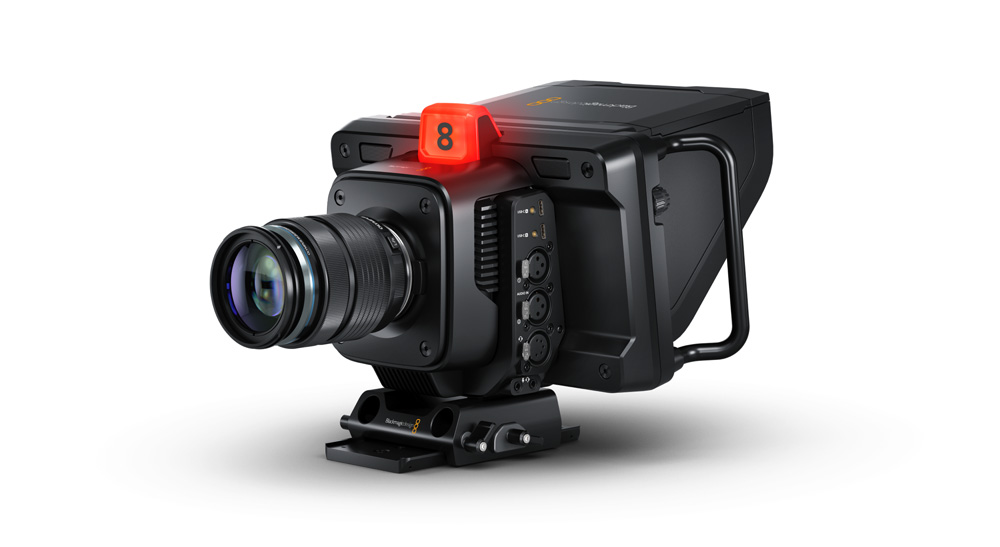 The Blackmagic Studio Camera features gain from -12dB (100 ISO) up to +36dB (25,600 ISO) so it's optimized to reduce grain and noise in images, while maintaining the full dynamic range of the sensor. The gain can be set from the camera, or remotely from a switcher using the SDI or Ethernet remote camera control.

The amazing 4K sensor combined with Blackmagic generation 5 color science gives customers the same imaging technology used in digital film cameras. The color corrector can even be controlled from the switcher. With 13 stops of dynamic range, the camera has darker blacks and brighter whites, perfect for color correction. The sensor features a resolution of 4096 x 2160 which is great for both HD and Ultra HD work. Plus, all models support from 23.98 fps up to 60 fps.

With the popular MFT lens mount, Blackmagic Studio Cameras are compatible with a wide range of affordable photographic lenses. Photographic lenses are incredible quality because they're designed for use in high resolution photography. To eliminate the need to reach around to adjust the lens zoom and focus, the optional focus and zoom demands let customers adjust the lens from the tripod handles just like a large studio camera. It gives customers the same feel as an expensive B4 broadcast lens.

The large 7" high resolution screen will totally transform how customers work with the camera because it's big enough to make framing shots much easier. On screen overlays show status and record parameters, histogram, focus peaking indicators, levels, frame guides and more. Customers can even apply 3D LUTs for monitoring shots with the desired color and look.

Unlike consumer cameras, the Blackmagic Studio Camera 4K Pro model has SDI connections that include talkback so the switcher operator can communicate with cameras during live events. That means the director can talk to the camera operators to guide shot selection, eliminating the problem where all cameras could have the same shot, at the same time. The talkback connector is built into the side of the camera and supports standard 5 pin XLR broadcast headsets.

Blackmagic Studio cameras have lots of connections for connecting to both consumer and broadcast equipment. All models feature HDMI with tally, camera control and record trigger, so are perfect for ATEM Mini switchers. Customers also get headphone and mic connections, and 2 USB-C expansion ports. The advanced Blackmagic Studio Camera 4K Pro model is designed for broadcast workflows so has 12G-SDI, 10GBASE-T Ethernet, talkback and balanced XLR audio inputs. The 10G Ethernet allows all video, tally, talkback and camera power via a single connection, so setup is much faster. That's just like a SMPTE fiber workflow, but using standard Category 6A copper Ethernet cable so it's much lower cost. 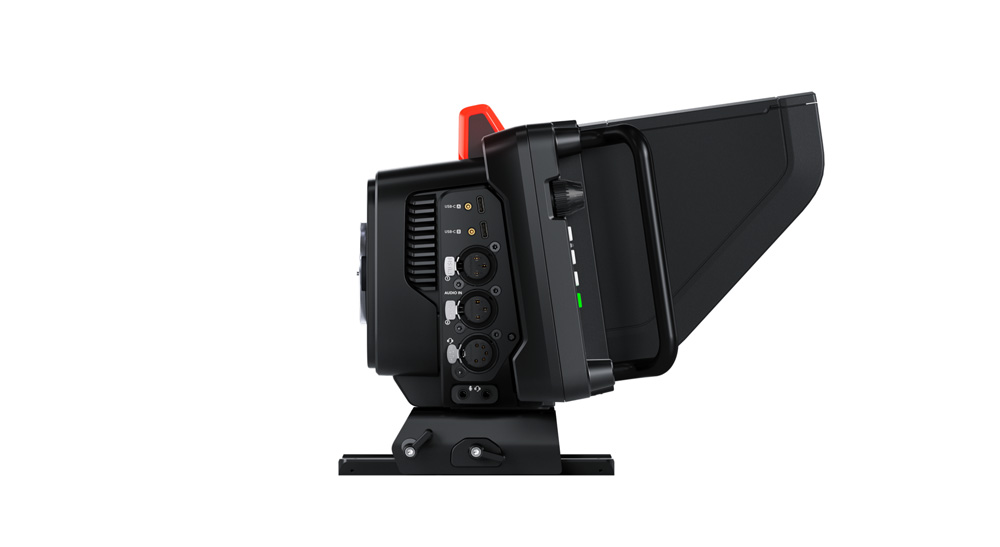 The Blackmagic Studio Camera features a high speed USB-C expansion port that allows customers to record to external disks or connect to a wide range of accessories. Plug in an external USB flash disk and the camera can record high quality 12-bit Blackmagic RAW files for later editing and color correction. That means customers can just move the disk to a computer to work, and customers don't need to waste time with file copying. Plus the USB port will power any phone or disk that’s plugged in.

Some file formats such as H.264 are highly compressed, so add noise and artifacts, causing sensor detail to be lost forever. Blackmagic RAW eliminates this problem so customers get stunning images with incredible detail and rich color throughout the whole post production pipeline. Blackmagic RAW also saves camera settings as metadata so customers can change ISO, white balance and exposure later in DaVinci Resolve. Plus the files are small and fast, so editing responsiveness is incredible.

Because the most common location to place microphones is near to cameras, the Pro model includes the best audio ever designed into a studio camera. The professional 2 channel balanced XLR inputs support +24 dBu line level and have an ultra low noise microphone preamplifier with P48 phantom power alongside an equivalent input noise (E.I.N.) of -131 dBV(A). That's followed by two 117 dB high dynamic range analog to digital converters, so customers get the high end audio demanded by broadcasters and audio engineers. This means any microphone plugged into the XLR inputs will have a higher level of noise than the camera's audio.

Blackmagic Studio Cameras have lots of different power options. All models have a common 12V DC locking power connector so the cable won't be accidentally pulled out. However if users are using a single Ethernet cable to connect to the Blackmagic Studio Camera 4K Pro model, then the whole camera and its accessories can be powered from the Ethernet connection. The Blackmagic Studio Converter has a large power supply that adds PoE power to the Ethernet cable so customers don't need any power connection to the camera. That’s a great solution when there's no power available where the cameras are placed.

The optional zoom and focus demands can be added to turn affordable photography lenses into amazing broadcast lenses. The focus and zoom demands have USB-C connections so they work with all Blackmagic Studio Camera 4K models. Each zoom and focus demand has 2 USB-C ports, so customers can daisy chain them then connect to the camera with a single USB connection. The design has an incredibly precise feel and so customers get very fine lens control, and customers can frame and adjust the lens without taking their hands off the tripod handles. 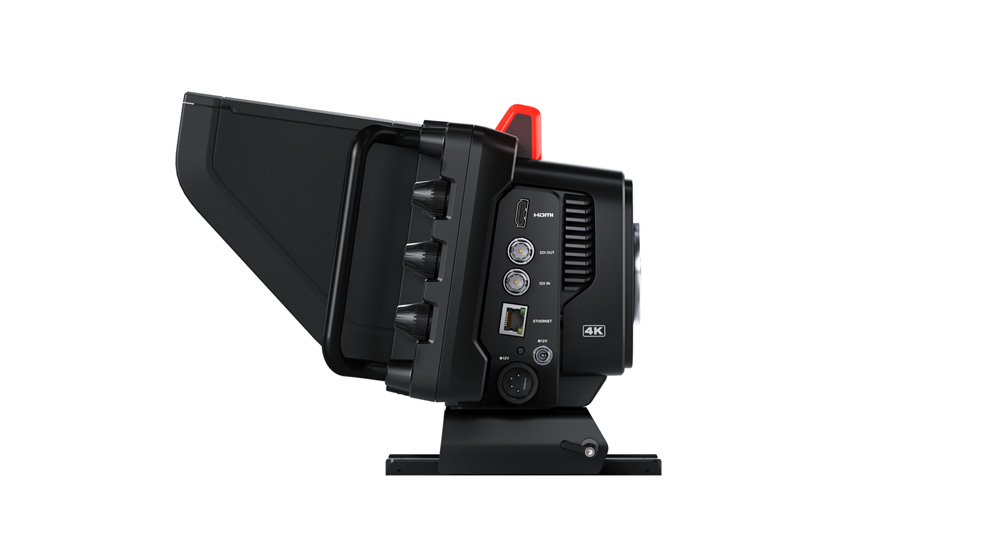 With 10G Ethernet on the Pro model, customers can connect all signals to the camera with the one Ethernet IP link connection. That means the camera feed, return program feed, timecode, reference, tally, talkback and control are all sent down the single cable. That's the same benefits of SMPTE fiber, but the standard 10G copper Ethernet cable is much lower cost. The Blackmagic Studio Converter allows breakout of all the video, audio and talkback connections at the studio end. It also includes a massive power supply that powers the camera down the Ethernet cable, so customers don't need a power source near the camera.

"These new studio cameras are built on all the knowledge and customer feedback from the original Blackmagic Studio Cameras," said Grant Petty, Blackmagic Design CEO. "These new models are a big step forward and they have been designed to be high end cameras, not entry level cameras. They might be small and self contained, but the features such as the built in 10G Ethernet, low light capability and professional viewfinder design make them very high end cameras for high end work!" 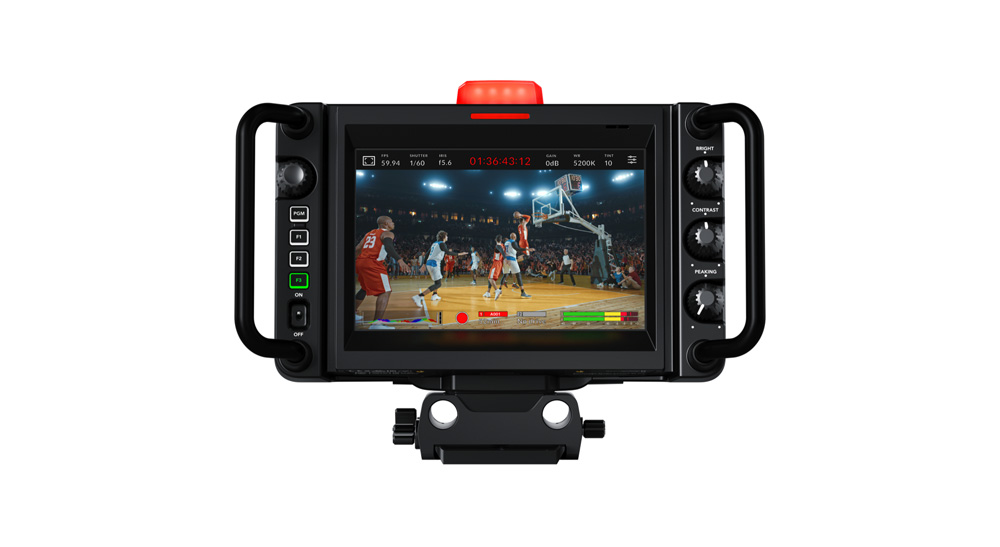